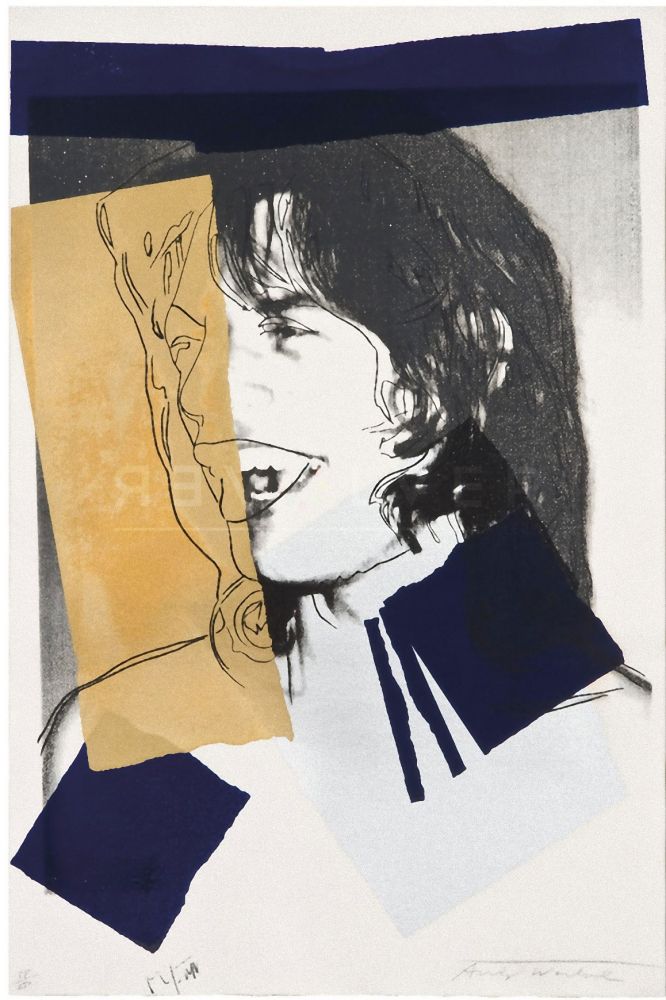 MICK JAGGER 142
Mick Jagger 142was painted while Warhol was at the height of his fame. Warhol spent a lot of time with Jagger and his wife Bianca. He was was closest to their Jagger’s daughter, Jade, whom Andy taught how to paint. He produced this screenprint of Mick Jagger as part of a portfolio of 10 in 1975.

MICK JAGGER 142 AS PART OF ANDY WARHOL’S LARGER BODY OF WORK
Mick Jagger 142 is one of several pieces that Andy Warhol did on Mick Jagger. In 1969 the Rolling Stones worked on their ninth studio album Sticky Fingers. The band approached Andy Warhol and asked him to design its sleeve. Warhol agreed and received a letter from Mick Jagger that included a polite warning not to make the cover too complex to avoid problems during production. Warhol ignored Jagger’s warning and went on to produce an unforgettable cover that featured a close-up shot of actor and “Warhol superstar” Joe Dallesandros.
Warhol also expanded into the realm of performance art with a traveling multimedia show called The Exploding Plastic Inevitable, which featured The Velvet Underground, a rock band. Warhol also worked with his Superstar performers and various other people to create hundreds of films between 1963 and 1968. These films were scripted and improvised, ranging from conceptual experiments and simple narratives to short portraits and sexploitation features. His works include Empire (1964), The Chelsea Girls (1966), and the Screen Tests (1964-66).