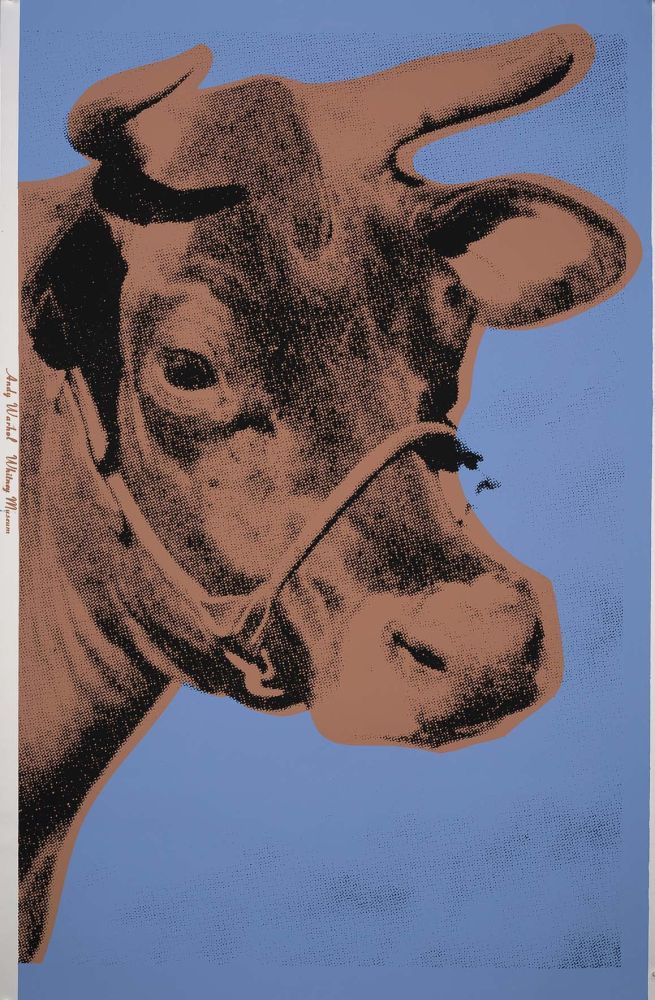 COW 11A
The inspiration for Warhol’s Cow portraits came from Ivan Karp, an instrumental art dealer in the 1960s. Karp once told Warhol, “Why don’t you paint some cows? They’re so wonderfully pastoral and such a durable image in the history of the arts.” (POPism: The Warhol Sixties, p. 22) Gerard Malanga, Warhol’s printer, was the one who chose the photograph of the cow. But ultimately, it was what Warhol did with this image that made the final product so interesting. For the colors, he used a light brown on a bold blue that made the cow look like a playful storybook animal. Warhol printed the cow on wallpaper, introducing this process to his creative production. This particular print was published for an exhibition at the Whitney Museum of American Art in New York, 1971.

COW 11A AS PART OF ANDY WARHOL’S LARGER BODY OF WORK
Cow 11A, is the second of the four-color schemes in the series produced from 1966 to 1976. The color schemes that Warhol published between 1966 and 1976 were Pink Cow on Yellow Background (1966), Brown Cow with Blue Background (1971), Yellow Cow on Blue Background (1971) and finally Pink Cow on Purple Background (1976). Warhol’s Cow wallpaper was his formal effort to introduce the production of wallpaper into his creative repertoire. The wallpaper was first printed in 1966 to paper the gallery walls for Warhol’s exhibition at the Leo Castelli Gallery. The opening of his exhibit showed walls covered in wallpaper consisting of repeated large fluorescent pink cow heads on a bright yellow background. Every inch of wall space from floor to ceiling on each wall was covered in these cow portraits. Gallery owner and dealer, Leo Castelli, was so moved by the show, that he went to such lengths as to have professionals install the wallpaper so that the guests could see the artist’s vision.