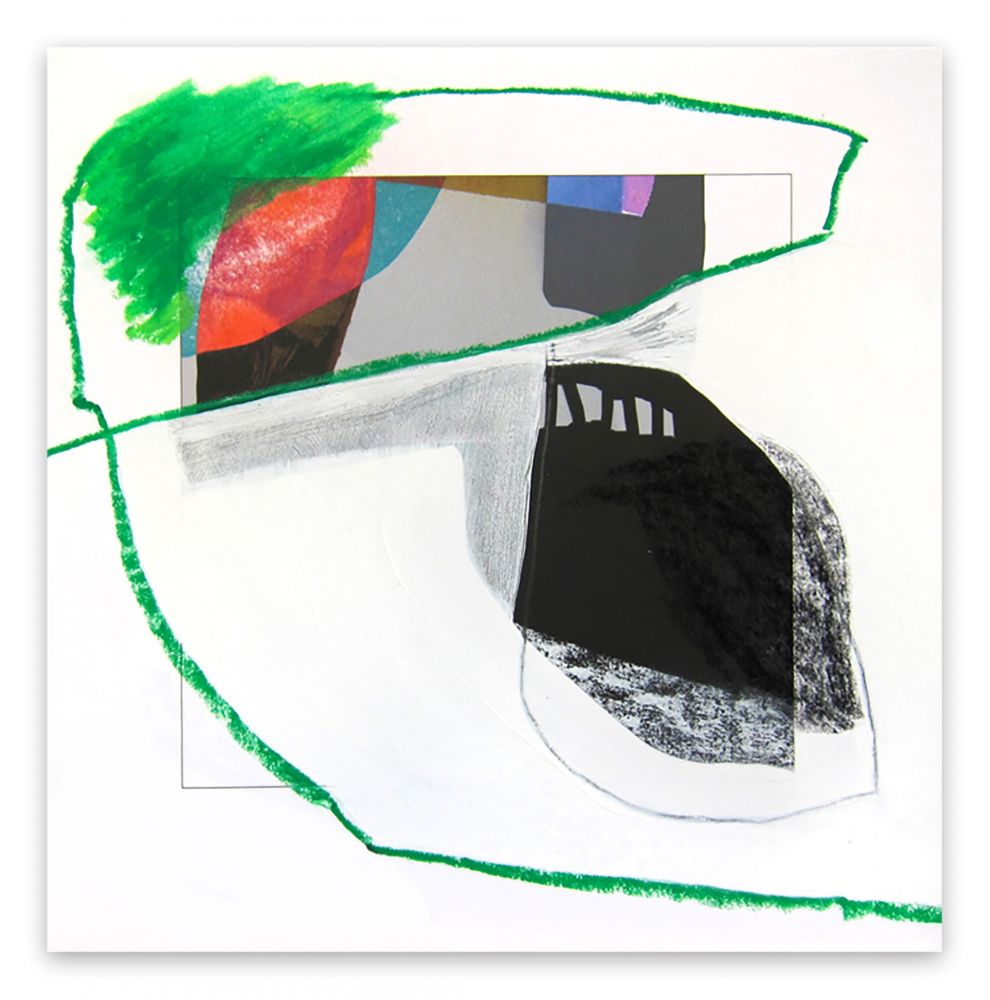 This mixed media work on paper is one of numerous small-scale works, along with 8 medium-scale paintings on linen, that Cantrick produced for her 2012 series based on the prose poem "The Pebble"; by French modernist poet Francis Ponge.

The parallel between the poem and the paintings has to do with the physical disintegration of an aggregate and its consequences for the integrity of the disintegrated object.

The largest of the paintings, a diptych that evolved from a photo taken from a window in the artist’s studio, served as a matrix/aggregate that Cantrick digitally deconstructed and reconstructed into studies for the paintings and small-scale works.

The matrix and 28 of the small works (including Boston pebble 21) were exhibited at the Boston French Cultural Center in 2013.

Susan Cantrick is an American abstract painter whose primary interest is in painting as a structured visual response to sub-linguistic thinking. Her paintings are analogs of her pre-verbal perception that aim to be as articulate as possible, crystallizing the vitality and complexity of emergent cognition. She lives and works in Paris, France.

Her hybrid practice favors a stylistic eclecticism that can belie its coherent underpinnings.

The various processes she explores in her work combine elements of structure and freedom.

For the last 10 years, she has been painting from digital studies that are generated from photo-fragments of her previous work. The results resemble what she characterizes as “a gamut of genealogies,” paintings that share a common visual ancestry with their predecessors.

She recently embarked on the challenge of returning to previously unfinished works, proceeding with new compositions imposed on the already inhabited space. Her various approaches investigate painting as state of mind, process, and object, revealing a connection to ideas about context and the renewal of identity.

Alongside her painting practice, Cantrick creates small-format collages mounted on paper and panel that are often composed of alternate applications of paint and ink-jet printed imagery.

Beyond a love of color and the sensuality of paint, Cantrick’s process is driven and defined by her convictions about painting as a form of visual thinking rather than narration, illustration, or critique. As a painter, she thinks in terms of materializing the moment of her perceptual experience when thoughts begin to cohere but before they formulate themselves into language.

Though she has occasionally used literature or photos from her environment as points of departure, specific external stimuli are rarely referenced. At the same time, she is aware of how the body and landscape have influenced her preoccupation with how to manipulate flat pictorial space -- how best to show its ambiguities and exploit its complexities.