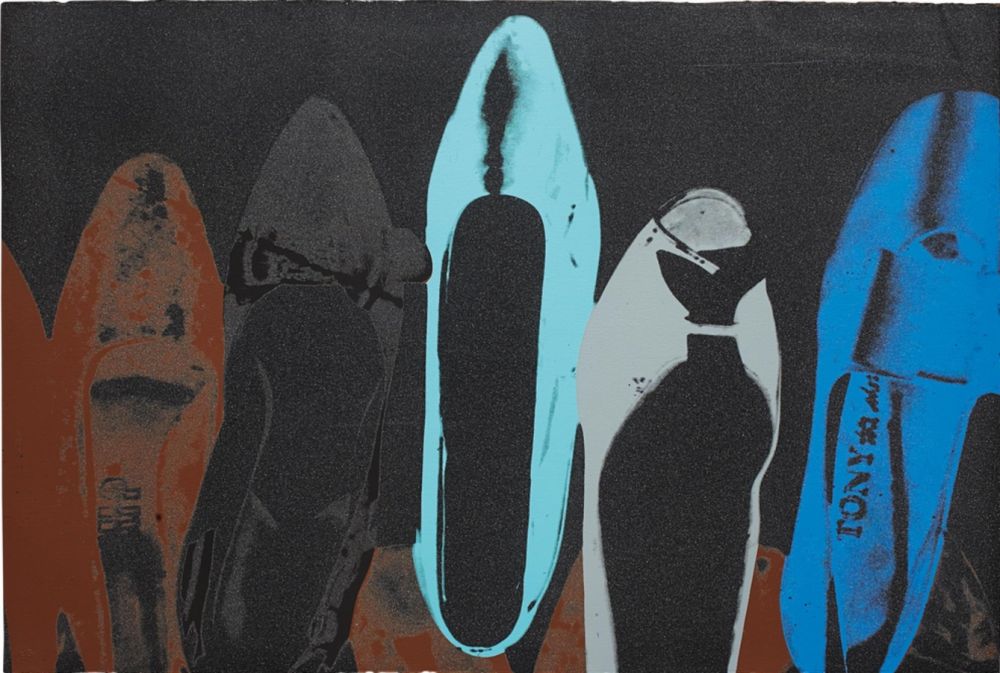 DIAMOND DUST SHOES 257
In 1980, Andy Warhol returned to his roots as a commercial illustrator, by creating his Shoes series. Warhol loved to draw them—high heels, pumps, or jeweled stilettos– many of them were blotted-line drawings, filled in with color, and created when the artist was a commercial fashion illustrator in 1950s New York. Warhol implemented his signature style of repetition, arranging the shoes in a seemingly haphazard, yet methodical manner. The composition provides a candid perspective of shoes, spilled out on the floor in no particular order, but also presents the various views of the classic high-heel, leaving no element of the shoe hidden. The conceptualization of these prints, undoubtedly, is a revival of the beginning of his artistic career in which his specialty was none other than women’s shoes.

DIAMOND DUST SHOES 257 AS PART OF ANDY WARHOL’S LARGER BODY OF WORK
During the early 1980s, Andy Warhol was forming bonds with a number of younger artists in the New York art scene including Jean-Michel Basquiat, Julian Schnabel and David Salle. Warhol saw a re-emergence of critical and financial success during this period of his life. In the mid-1980s, Warhol took a step back from screenprinting and created work and for television show Saturday Night Live, had a guest appearance on the “Hidden Treasure; Picture From the Past; Ace’s Salary” episode of the The Love Boat in 1985 and produced music videos for rock bands such as The Cars. Warhol also signed with a few modeling agencies, appearing in fashion shows and numerous print and television ads. His television shows Andy Warhol’s T.V. (1983) and Andy Warhol’s Fifteen Minutes (1985) were broadcast on New York cable television and nationally on MTV.